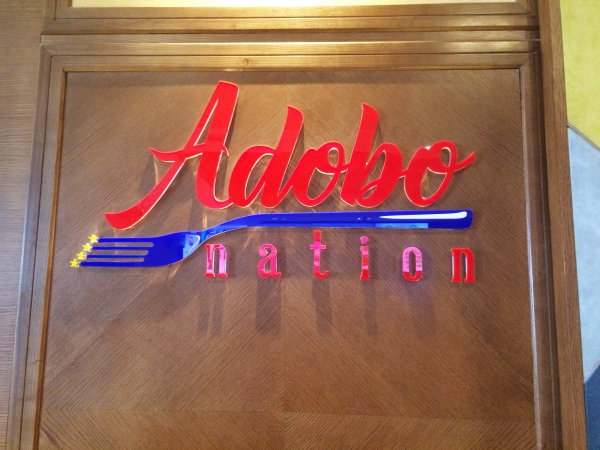 I think Filipinos in Dubai are quite spoilt for choice of restaurants serving our all-time favorite dishes. Restaurateurs in UAE now recognize that the Filipino community are growing in numbers and since we are nation of hearty eaters, we can’t have too many restaurants dedicated to our cuisine.

When my Facebook friend Lala told me that there’s a new Filipino restaurant in Dubai, I knew I had to visit it. So yesterday after mass, our gang went to Raintree Hotel in Deira for lunch. 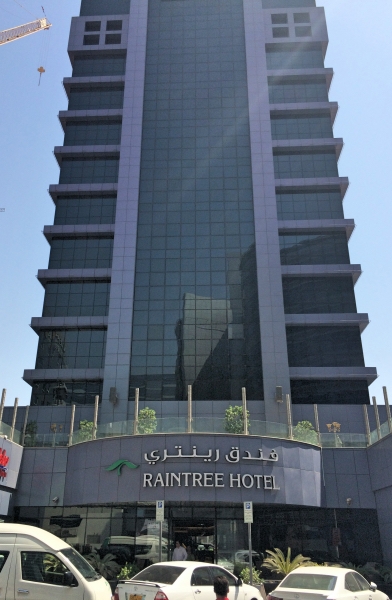 We were there a few minutes before 12 noon but they entertained our group and let us in. They are open from 12 noon on Fridays. 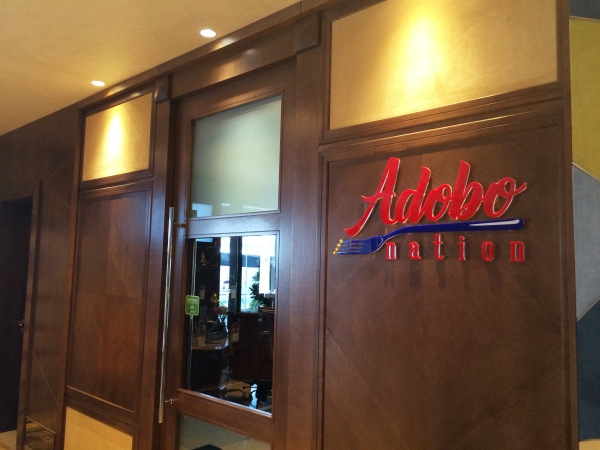 The place looks classy. I’m used to seeing ‘carinderia’ or food court setting in most Filipino restaurants in Dubai and Sharjah that being seated in plush chairs, with dim lights and proper table setting is quite refreshing. 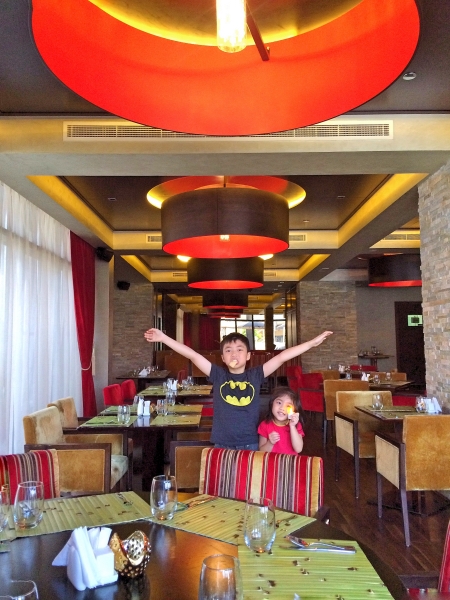 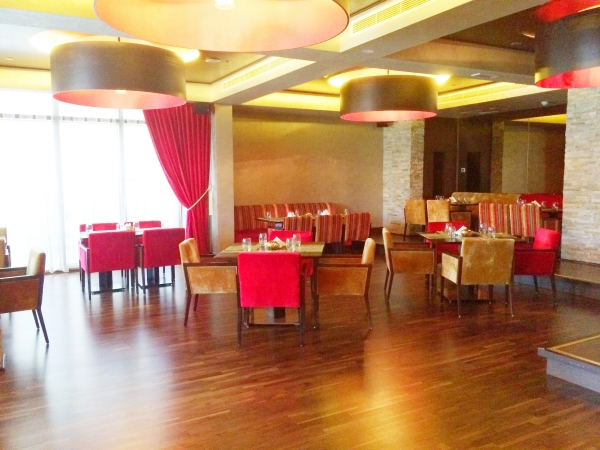 We scanned the menu. 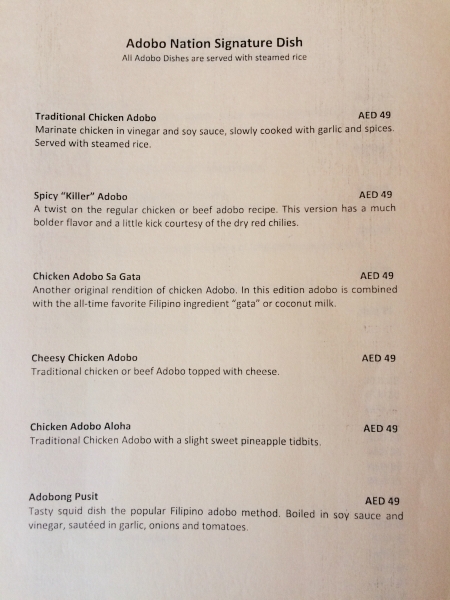 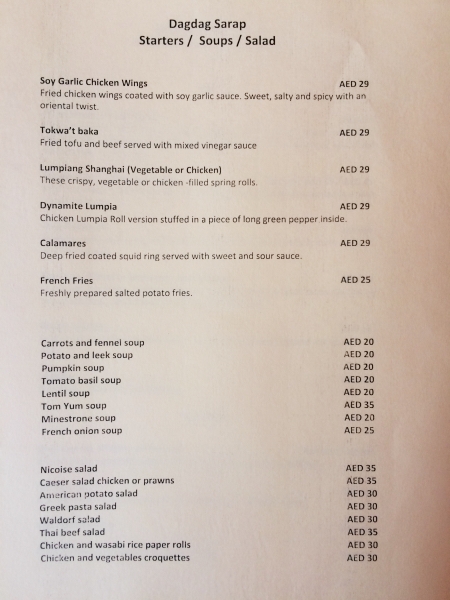 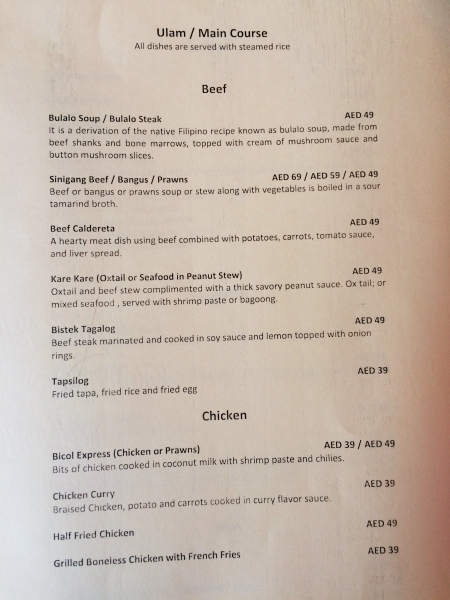 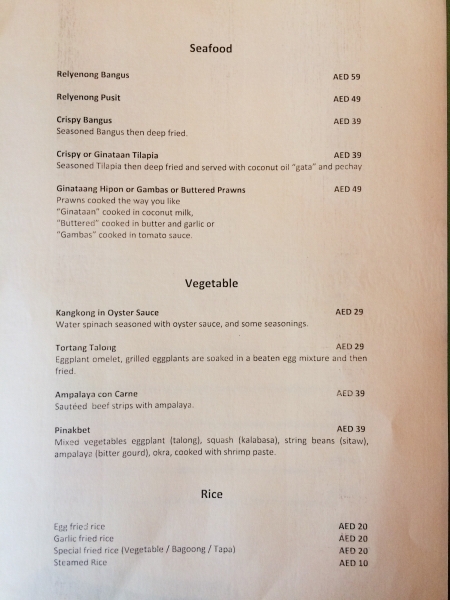 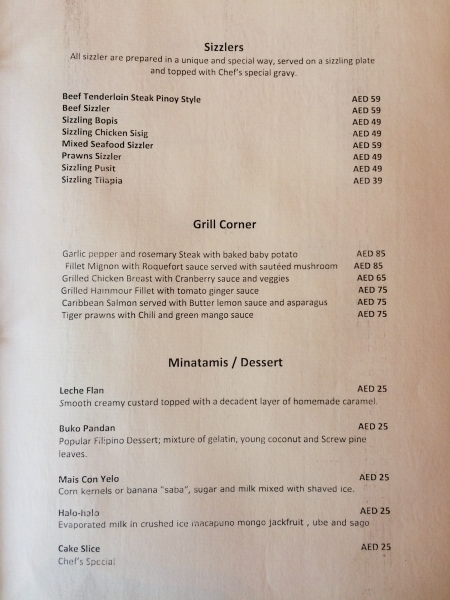 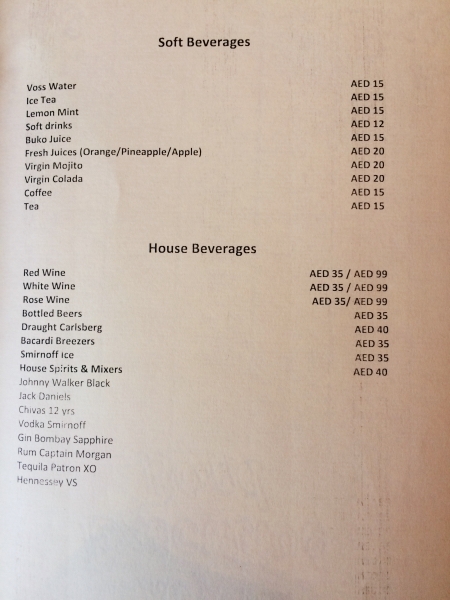 It was quite disappointing to have some of our choices not available that day such as Bulalo, Relyenong Pusit and Grilled Hammour Fillet.  But that didn’t stop us from ordering.

We started with drinks. I had Virgin Mojito and I love it! 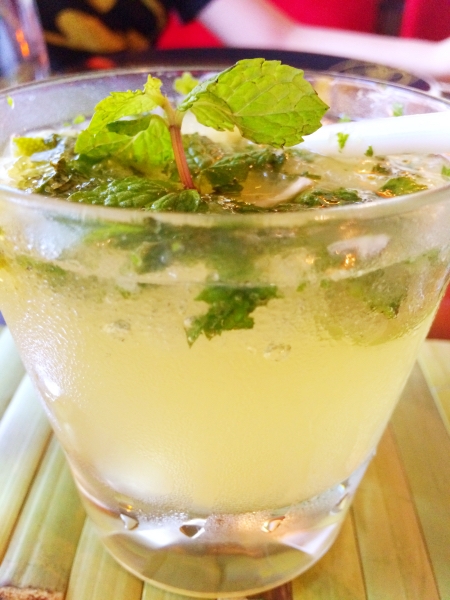 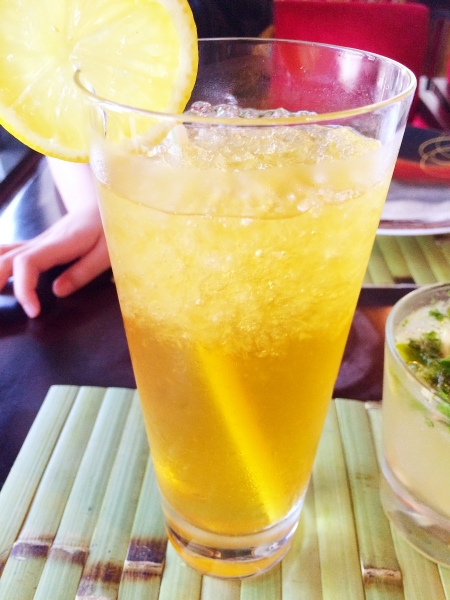 and the boys settled with Diet Coke.

While waiting, we were served a bowl of crackers with vinegar dipping. 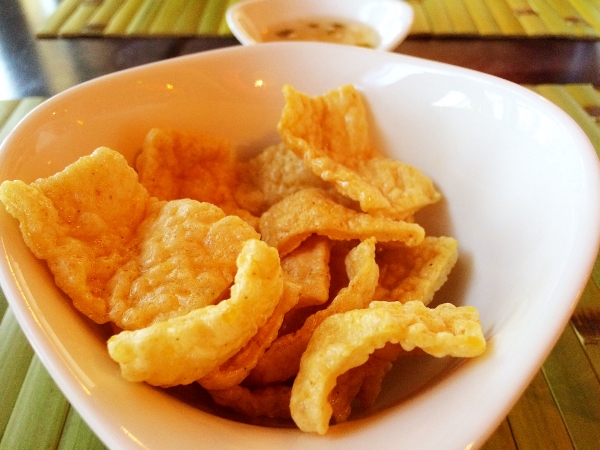 I honestly think that the waiting time we had was not bad but my son, who’s quite impatient, kept on asking if the food was ready. I think it would help if there are some entertaining activities for kids. A simple colouring paper and crayons can do the trick.

My nephew, Lance, wanted Calamare. It should come with sweet and sour sauce but I didn’t see any. 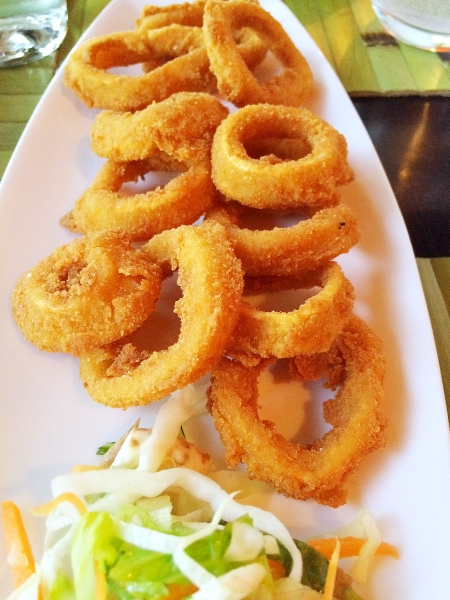 How can you be in Adobo Nation and not order an adobo? Gibson wanted the one with gata and I wanted to try the spicy one, but with kids eating, we settled with the Classic Adobo. It was a hit. 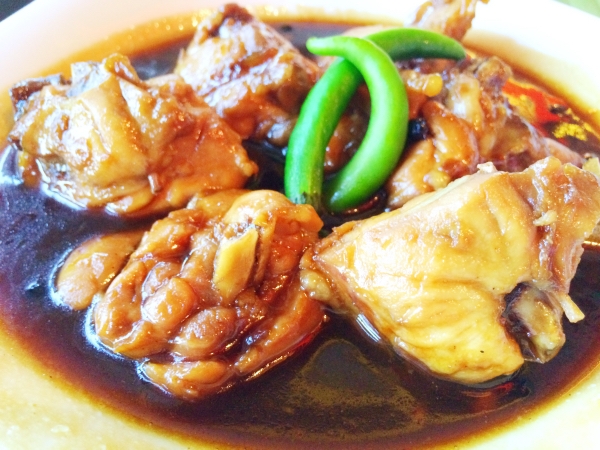 We ordered Kare Kare and I was expecting oxtail part but it has the meaty part of a cow instead which I’m not a fan. Nonetheless, the sauce was tasty and nice. 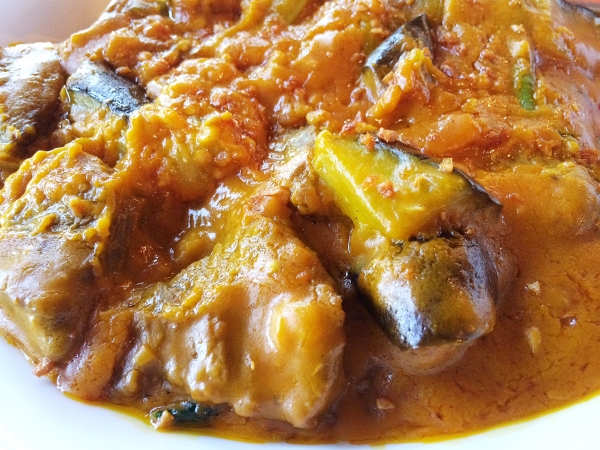 Cole wanted Buttered Shrimp but I asked the lady first if the shrimps are served with shell still on. Although I know that having the shell and heads on will make the dish tastier, it would also mean I have to remove it for Cole and I’m not really in the mood. I know, bad mother 😐.

I was glad it’s already peeled. 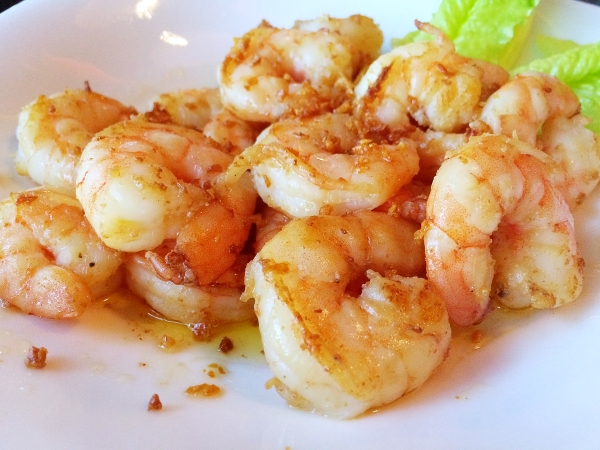 The last dish to arrive was our Mixed Seafood Sizzler. It has squid rings, shrimp, mussels and vegetables swimming in sweet sauce. It’s quite sweet for my liking but the rest of the gang enjoyed it. 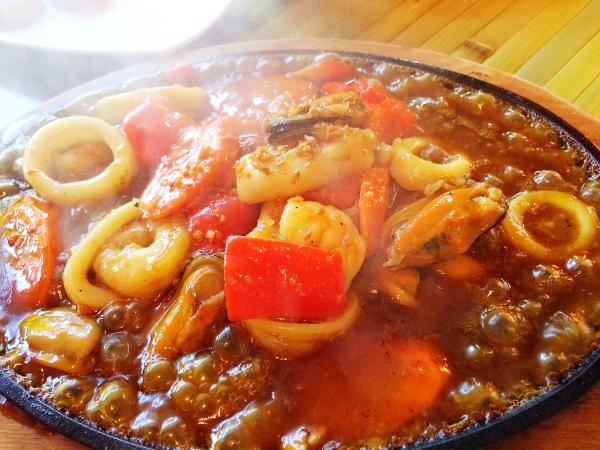 For desert, we ordered Leche Flan and this is the only letdown for me. It’s more of a custard than a real leche flan. Well, it’s a good custard really but they shouldn’t label it as leche flan because it’s not. 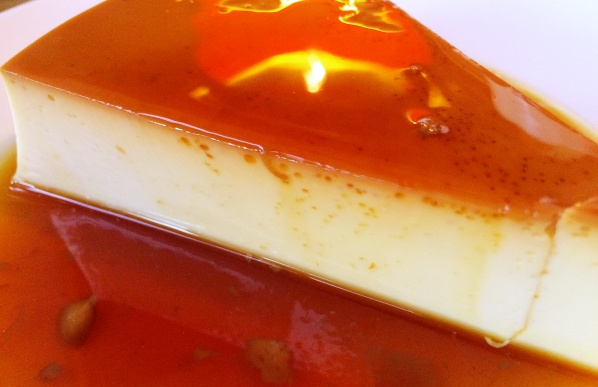 The Halo-Halo compensated for the leche flan disappointment. This picture doesn’t do justice as this glass only had quarter shaved ice and the rest were already filled with nata de coco, kaong, ube halaya, sago and several other jellies and sweets. Craving satisfied. 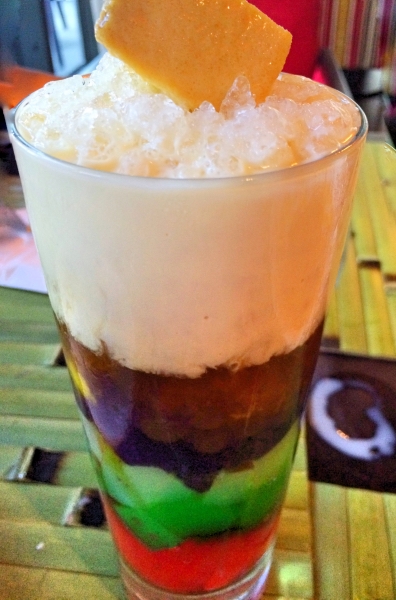 We paid 440 dhs for food and drinks. It’s quite expensive compared to most Filipino restaurants we’ve visited but I think Adobo Nation is trying to attract a different kind of Filipino clientele. As I said earlier, this restaurant has that sophisticated vibe. They only serve Voss water, located inside a hotel, and they serve alcohol. Several things you won’t see in a typical Filipino restaurant in Dubai.

Will I come back? Yes. I would want to try their other dishes and report this to you again.

Have you been to Adobo Nation? What’s your thoughts?