This was originally posted on my other blog which I am not updating anymore. I decided to repost it here. This happened last March 2015, just less than 3 weeks before our scheduled flight to Italy for holidays. I added more info in case this happens to you. I hope not…

I came to office very early feeling stressed-out as I have to finish a lot of things before I leave the company (Post edit: I’m serving my notice period that time). I prepared a to-do list and looking forward to a busy and productive day. I will be joining my new company next week and I want to make sure that my handover is complete.

But before anything else, I thought of cleaning the contents of my bag. That’s when my horror story started…

First to give you a background, I always carry my passport. I have my reasons but I won’t explain it now. So anyways, three days ago, while we were in a hospital, I have a feeling that my daughter’s water bottle tilted inside my bag. I put my hand inside but didn’t feel anything so I just carried on.

Today, while cleaning my bag, I noticed that my Kidzania vouchers are wet! I looked closely and breathed a sigh of relief when I found one ticket that still has a readable validity date on it. That should be fine.

Next thing I pulled out was the police report (my BIL had an accident using my car), I again hyperventilated and prayed that it’s not damaged as I don’t want to go to the police station for a new copy. I cautiously unfold the paper and thanked God it didn’t disintegrate and I can still read the police’s notes.

Then one by one I removed all wet receipts, business cards and whatnots from my bag. I thought the worst is over.

But then I saw it, my passport!!! I immediately checked and my heart sank. Some of the texts are unreadable and my photo was severely damaged.

My first thought is our trip to Italy. For sure, I can’t travel with this passport and after checking all my options I know that the only way is to apply for a new one. I left the office at lunchtime and went to our Philippine Consulate. They told me that it will take minimum of 5 weeks to replace it from Dubai. It won’t work as we are travelling in less than 3 weeks time.

“Can I fly to Philippines and get it from there?” I asked.
“Sure you can. May urgent doon, 7 days lang.” Manong said.
“Makakapasok ba ko ng Pilipinas with a damaged passport?”
“Oo naman, you can enter the country kase Filipino ka. Ang i-check mo kung makakalabas ka ng Dubai.”
“What?!?”, I almost had a heart attack.

They told me to check with airport immigration if I can leave the country with a damaged passport otherwise I will need to apply for a travel document. If this a dream, I hope to wake up soon!

So after the consulate, I went straight to Terminal 3. I showed my passport to the immigration officer and asked if I can fly out. He just flipped the pages and said it’s ok. “Are you sure?”, I asked. “Yes you can travel”, he repeated. I feel like recording his statement but I don’t want to agitate him and I would rather believe what he said.

As soon as I reached the office, I immediately purchased plane tickets for me and my daughter. There’s no way I can travel without Biel. Last time I left her, she was crying non-stop and everyone had sleepless nights. I also called my new boss and explained that although we had agreed that I am joining next week, I won’t be able to as I need to go to Philippines to get a new passport.

You can imagine the guilt, embarrassment and regret that I am feeling. All the hassle I’ve been through and the money wasted for a stupid mistake. All my plans were thrown out of the window. But that afternoon, while ranting to a friend, she told me how amazed she is on how fast I thought of a solution and be able to finalize everything in less than a day. She said that if it happened to her, she will cry first and wallow in misery.

My sister also reminded me of the conversation we had few weeks ago. I told her that, if I have choice, I want to rest first for a few weeks before joining the new company. I realized that I also keep on saying this to my friends. Ahhh, the Universe had heard what I’m saying and granted my wish. We should really be careful what we wish for.

So now, everything is set for my flight. I just need to pack my stuff. I am trying to remove all negative thoughts and psyching myself that this is happening for a reason. I may not understand it now but for sure I will learn something from this. I woke up this morning with a headache but I thanked God and prayed for a productive and beautiful day.

I hope you will also have a great day! Remember, a day above ground is always a good day. 🙂

Ok, to continue my story, when I handed my passport to the immigration officer in Dubai, he joked why I put my passport inside the washing machine. I laughed nervously and told him that the reason I’m going back to Philippines was to replace my passport. I said nothing else and prayed to all angels and saints that he would let me out. And he finally put that exit stamp. Phew!

I went to DFA in Aseana Business Park the following day. Obviously, I don’t have an appointment but they have a counter for people like me who just showed up. I’m with fellow OFWs, senior citizens and relatives of government officials. I learned something from this process and that is always get an appointment. The special counter seems to be exclusive but it’s not. The queue is longer and I don’t feel the exclusivity at all. Only avail this if there’s no other option.

Anyways, so after a few hours, my number was called and the lady who assessed my application said that passports will only be released after 14 working days. Wait, what? 14 freaking days??? WHY?

“Our system is down and we have a big backlog. Sorry, I can’t do anything”. I feel like crying. I pleaded and said that I flew all the way from Dubai just to get a new passport and DFA website says that an express service only takes 7 days. I can pay extra if required. I am starting to lose my patience.

She probably didn’t want to see a crazy ranting lady so she just took my application and said that I will need to speak to her manager for approval. While waiting, I met several OFWs who were also requesting for urgent passport processing for different reasons. Some of them were approved, others weren’t. I am so nervous.

When it was my turn, I again explained my situation to the manager – that I flew from Dubai with my daughter just to replace my passport. I told him that I have a scheduled trip to Rome and it cannot be cancelled.  He asked for my flight ticket to Italy and my return flight to Dubai. I showed him everything. I felt like explaining more but then decided to keep my mouth shut.

I almost kissed him when he granted my request but warned that I shouldn’t damaged my passport again as it’s punishable by law. I promised him that I’ll take care of my passport as if it’s my child. I learned my lesson.

After getting my passport, I applied for an OEC online and just paid for it in one of the Bayad Centers. On my return to Dubai, I went to Italian consulate in Trade Centre to ask if I will need to re-apply for a visa. The Schengen visa was intact but it was stamped on my damaged passport and now that I have a new passport, I wonder how it will work. It was a relief when they said it’s not an issue and I just have to bring both passports.

All’s well that ends well. Our first ever Euro trip was a blast! You can read more from here. 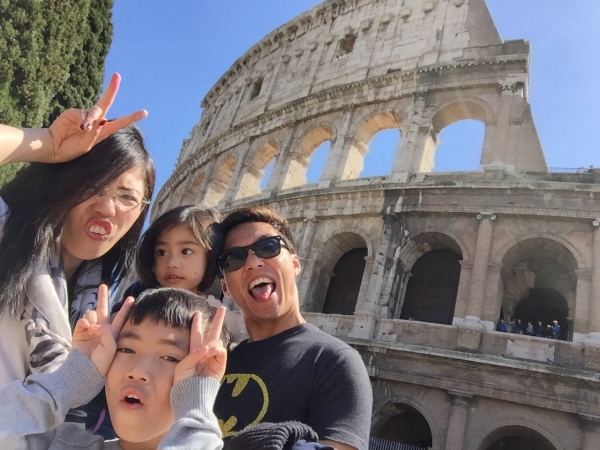 Moral lesson of the story: Secure your passports. If you intend to carry it with you, placed it inside a clear, resealable, and wet-proof plastic bag. My husband bought a safe and insists I keep it there. I think he checks my passport from time to time if it’s inside the safe. Well, he doesn’t need to. After what happened, I have no intention at all to carry it unless we’re flying. Never.