I saw the Bodega Streetfood sponsored ad on Facebook and I know I have to try it. Inviting the whole gang, we went there yesterday afternoon. The restaurant is located near Copthorne Hotel in Deira near Day to Day store. It’s right beside Dampa Seafood restaurant. Actually, from what I heard, Dampa and Bodega belong to the same company (or has the same owner?) and that’s the reason I guess why, when we were there, diners of Dampa were sitting on outside area of Bodega and Bodega staff don’t mind. 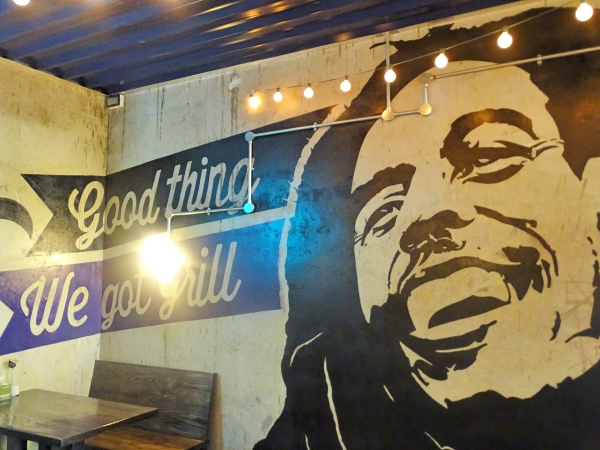 If you thought Dampa’s menu is limited, then be prepared because Bodega Streetfood’s menu items can be counted by Biel (she can only count ’til 15). Cole and Gibson had similar remarks “Eto lang?!” (rough translation: “Is that it?”). Naks, I don’t know why I’m even translating. As if non-Filipinos are reading the blog. Well, you never know!

Going back to the menu, they only have 3 appetizers, few mains, few sides and that’s it. In a way I thought it’s good. With just a few things on the menu, chance that the restaurant will be able to perfect the dishes is higher than having hundred items to choose from. But still, I guess it won’t hurt to add a few dishes more.

Here’s the one page menu. 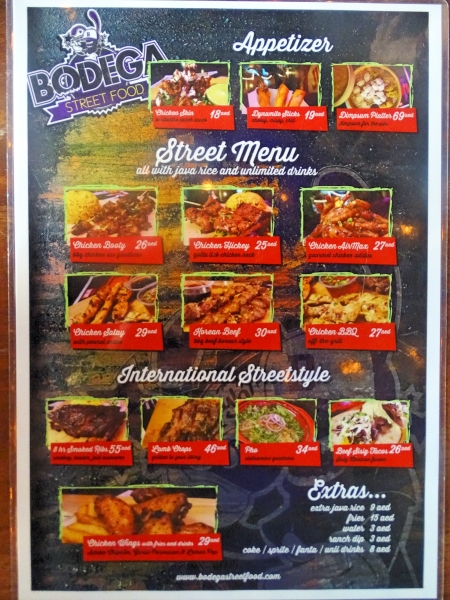 Since we were a big group, we got the chance to try almost everything on the menu which is good. Let’s start with the putok-batok (sorry, I don’t know the English translation) chicken skin. OMG, just ordering it makes me feel so guilty and taking a bite makes me want to go to the gym which I haven’t done for like 6 years now.

Crispy, not too oily (thanks goodness), and perfect with the vinegar that comes with it. A once in a year kind of indulgence. 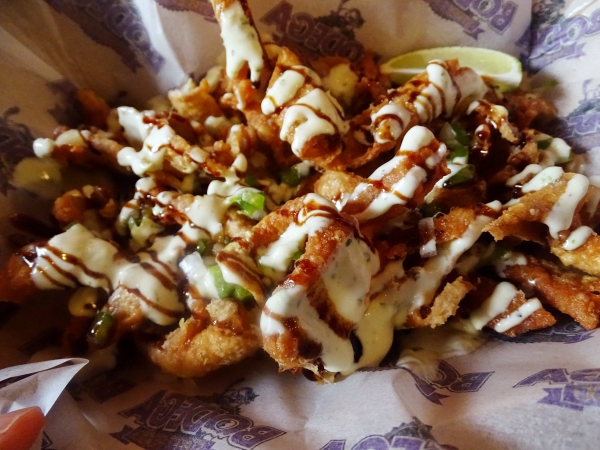 Next on the list is not for the faint-hearted. The restaurant calls it nicely as Chicken booty. For Filipinos, we call it pwet ng manok. Twerk it like Miley!

If you can get over the fact that your eating chicken’s ass, this actually tastes good. Tastes like our Filipino barbeque sa kanto.

We also had the chicken hickey or chicken neck. This has much more meat than what we used to eat in the Philippines which is good since it comes with rice.

Looks like malnourished chicken legs but they are actually the neck part of the chicken. 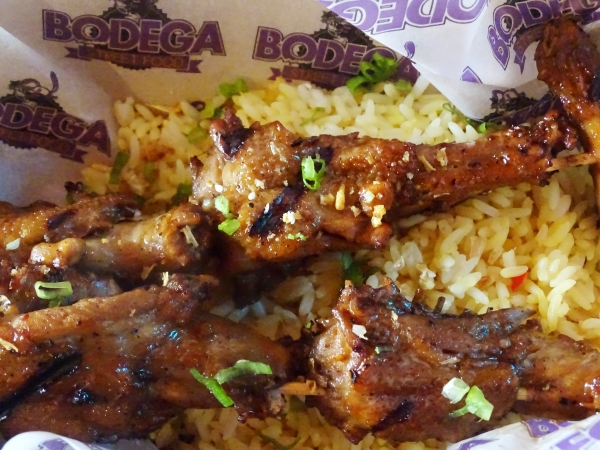 Then comes the Chicken Airmax. Cole kept on saying he wanted to try and I told him repeatedly that I don’t think he will like it. It’s chicken feet. But maybe he doesn’t understand (or imagine) what I am saying and he still insisted. So I ordered. His face when the food arrived was so funny I wished I had taken a video. He’s like “THIS IS BIRD’S FEET!!!!” and I was like, oh yes baby, I told you. I thought he had a nightmare that night 😂

I had one piece of Airmax and I thought it’s nice. It’s cooked the Adobo way 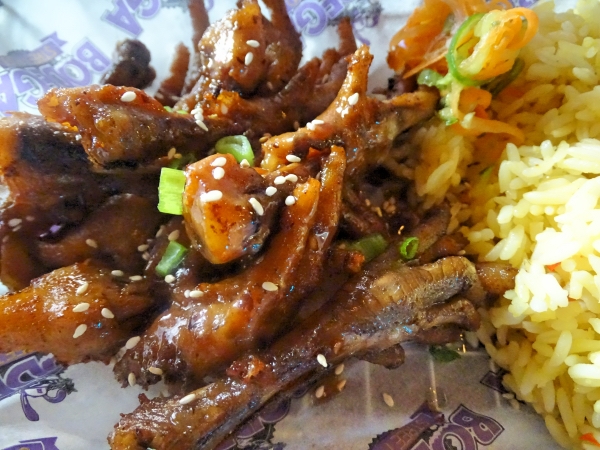 Then came the chicken satay which I didn’t order. I told the waiter that I didn’t order for it but he insisted that I did so I said, fine, as long as the 2 chicken barbeque will be served. To cut the story short, only 1 chicken barbeque came and it took sometime for the other order to arrive. You’ll think that they won’t charge me for the satay which I didn’t order but no, I still paid for them. There was this note on the cashier’s desk that says “Dry Run. Apologies for any inconvenience” or something like that so I just stretched my patience and didn’t make a big fuss about it. But next time it happens to you, don’t agree on paying something you didn’t order ok?

This Chicken Satay comes with peanut sauce served separately. I’m not a fan of satay so I can’t comment if this version is nice or not. 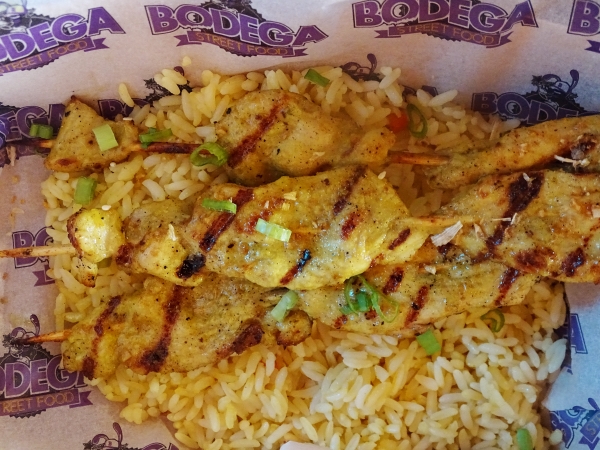 The Chicken Barbeque is like the Chicken Satay without the yellowish tint. I didn’t taste it but I was kind of disappointed on how it looks. 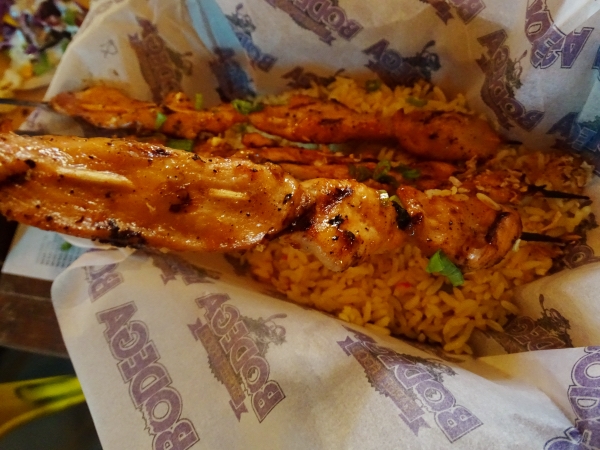 Another thing we ordered but didn’t get the chance to take a photo is the Korean Beef Barbeque. I wasn’t able to taste but my sister-in-law said that it tastes good and she enjoyed it. Good for her.

After the irritation from the chicken barbeque and satay issue wears off, I was able to enjoy my Pho which Cole and Gibson enjoyed as well. It’s tasty and tastes like a good Viatnamese noodle.

Not visible in the photo but there are meatballs and thin slices of beef in it. I love this and I’m craving for a bowl as I write this post. 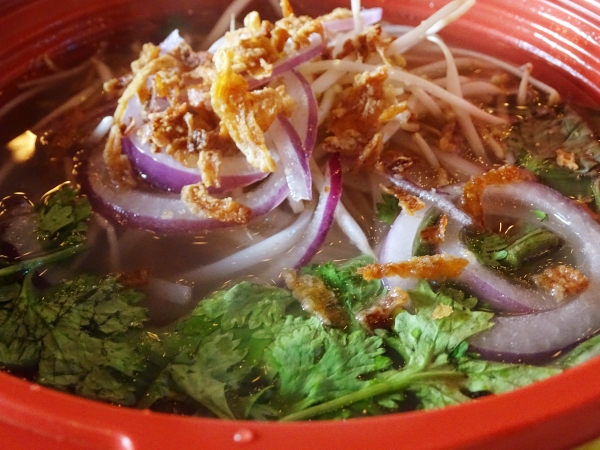 One more dish that I enjoyed is the Beef Sisig Tacos. It’s a bastardized version of a Mexican taco but it works well with me.

It has cabbage, bell pepper, onion, cheddar cheese, mayo and tasty meat. I don’t think it tastes like sisig but a good dish nonetheless. 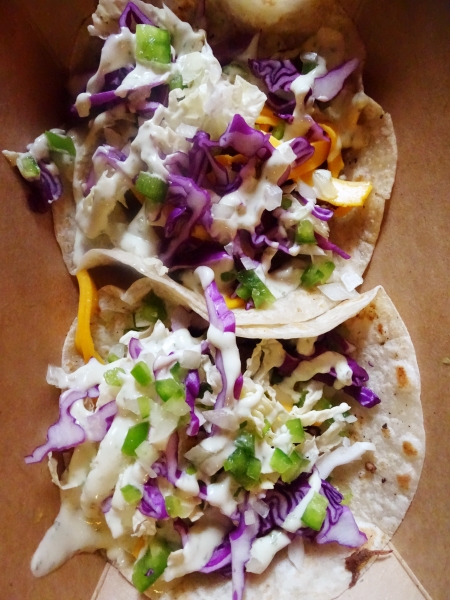 Especially if you put lots of Sricracha sauce. Hot! 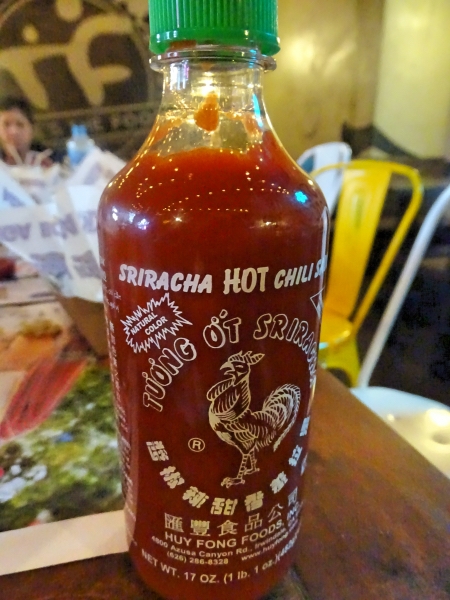 The kids and kids-at-heart had several orders of chicken wings. You can choose between Adobo Chipotle flavor, Garlic Parmesan and Lemon Pop. I ordered the first two flavours and they were both good.

The fries that goes with the chicken wings are also flavored which adds the extra oomph! 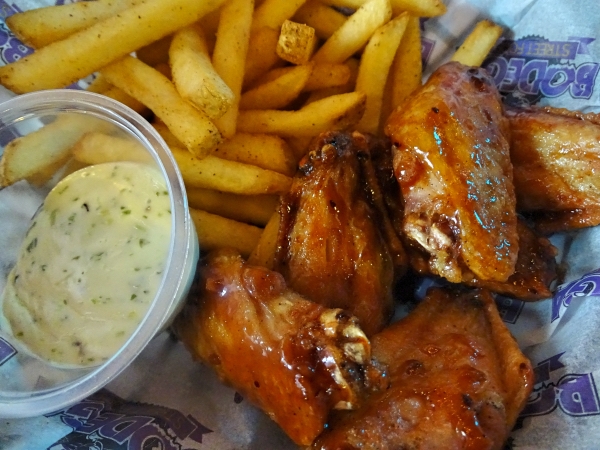 All items on the “Street Menu” comes with Java rice and unlimited soft drinks. And what do I think of this place? If you’re not hungry and don’t mind the unli-rice that Dampa offers, then I guess you will enjoy this place. Filipinos love seafood and eat-all-you can rice so most of us prefers to go to the nearby Dampa restaurant. But there are days that you’re craving for something light and just different (but still has the Pinoy taste) and Bodega will fit the bill.

You can check their Facebook page for more info: www.facebook.com/bodegastreetfood

Go and try it yourself and let me know. 🙂