To be honest, I’m not very keen to do trick or treating this year. Gone were the years when I was very excited to buy Cole’s costumes and search for events that he would enjoy. I was doing it for around 8 years and felt I had enough.

But then I feel guilty for Biel who’s only 3. Of course I want her to have the same fun memories of halloween so I snap out of my tardiness one fine day (which was yesterday) and decided that since it’s too late to look for a trick or treat party venue elsewhere (and the fact that it would be expensive to bring the whole gang), we will just have our own halloween party at home for the first time.

I called my ever reliable and artistic sister, Jholen, and told her of my idea.
I wanted to have a halloween themed kids’ party at home, try to invite several kids in our building, have some snacks and lots of sweets. In one day, we searched the internet, brainstormed, printed the art works, bought some treats and art supplies.

I’m happy to report that for only 250-300 dhs, we were able to pull off a fun-filled halloween party for kids. Success! 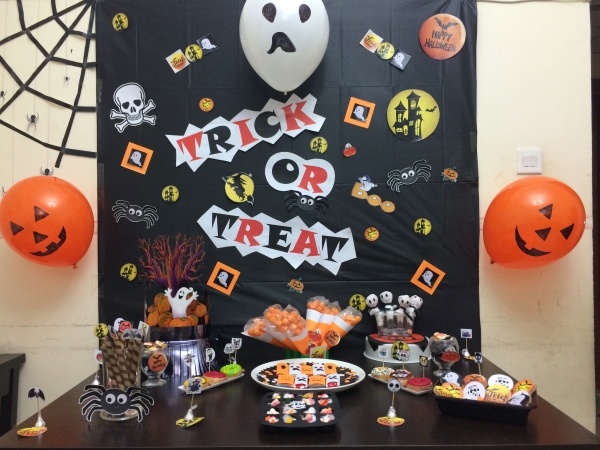 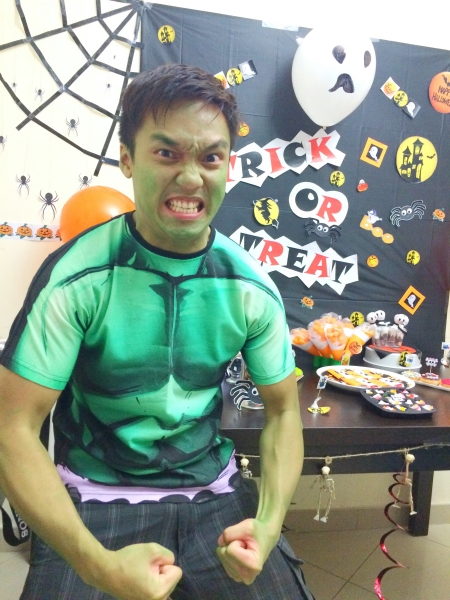 The Ghoul and Queen Elsa 😺

And this is me in Minnie Mouse inspired outfit. Just rummaged through my closet and managed to find my pajama top, Biel’s tutu and the perfect headband to finish the look. I will exert more effort next time. Watch out for it! 😂

For the party decor, it’s a combination of store bought and whatever is available in our house.

This centerpiece is from Party Centre. It’s around 30 dhs. 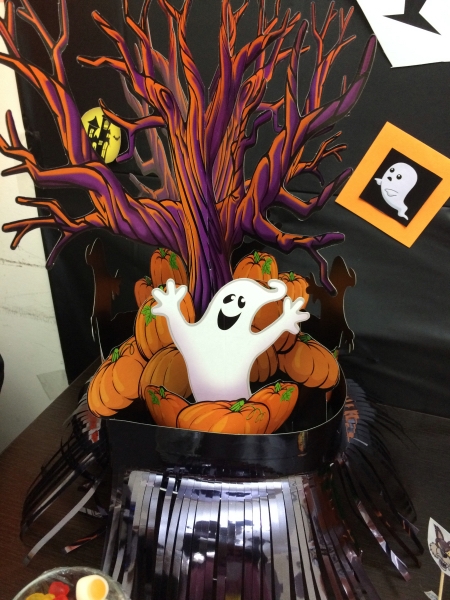 This glass was actually not filled with gummy candies. Underneath were small paper cutouts. 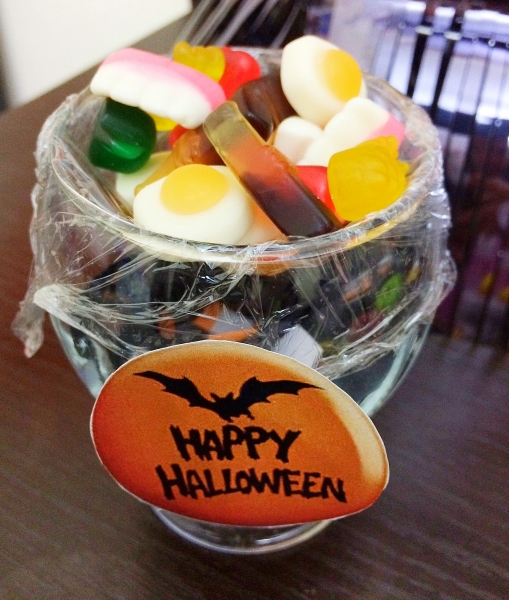 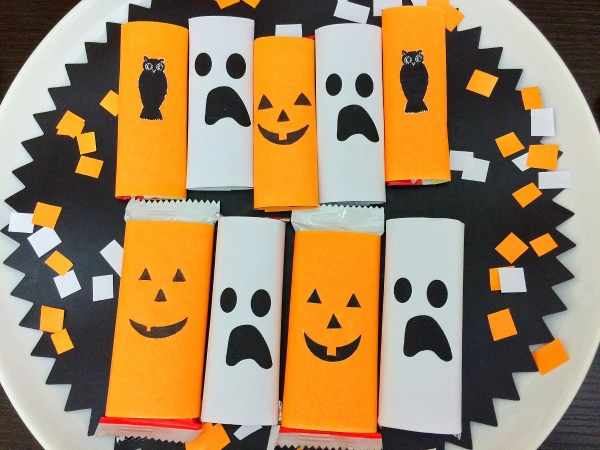 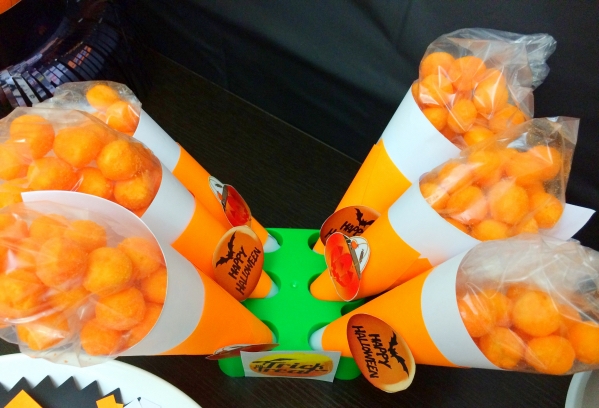 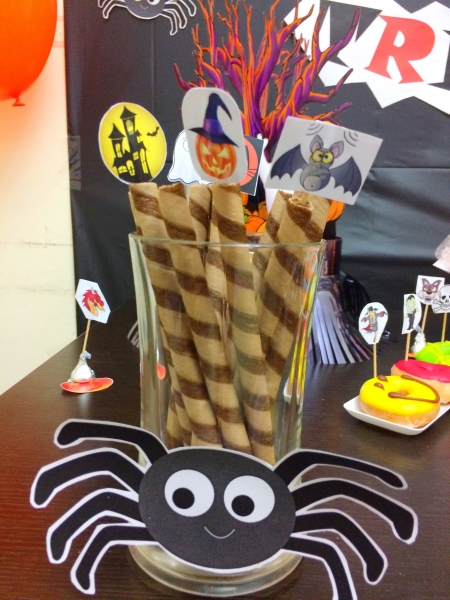 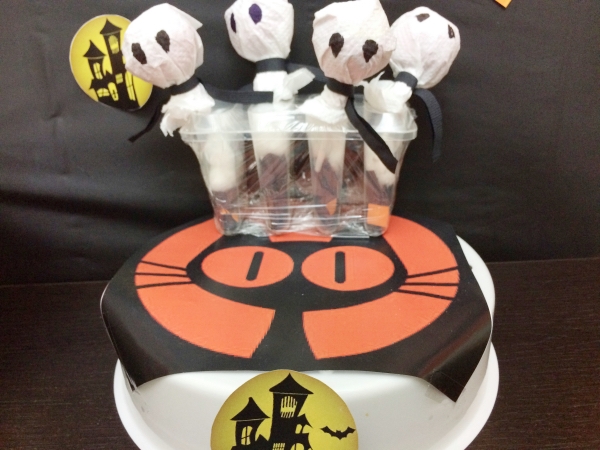 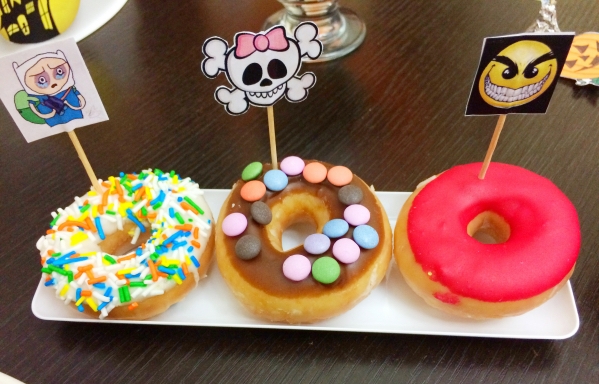 From Party Centre. Some hanging decorations for 21 dhs. 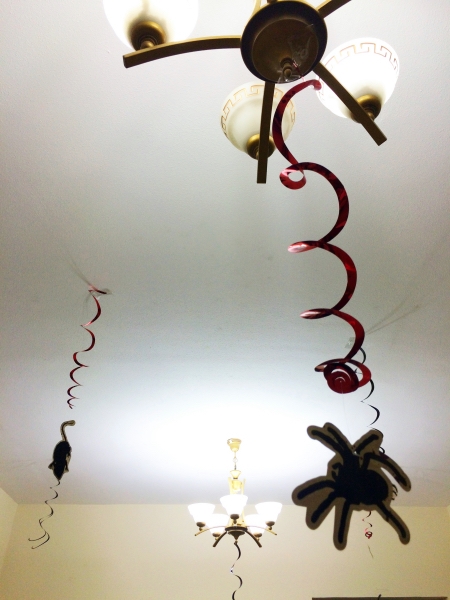 Little touches that made big impact 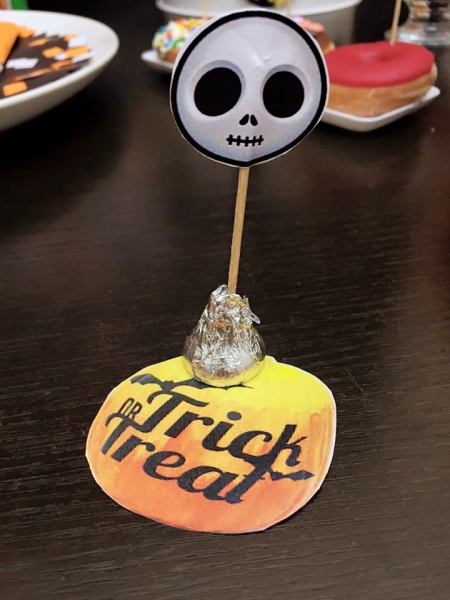 These skeletons were bought probably 3 years ago from Carrefour. You can see some missing parts but they’re still good. 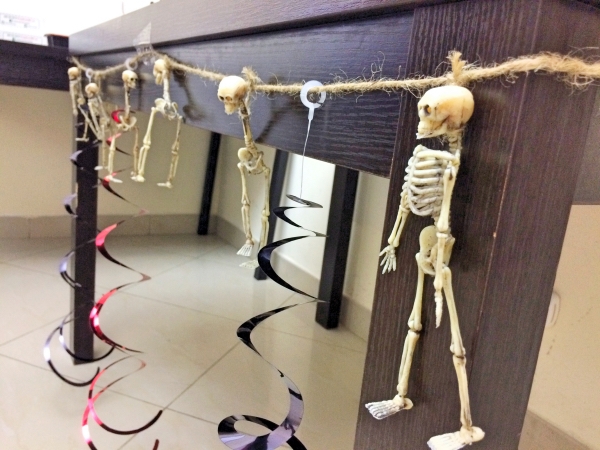 My collection of plates, cups, glasses and whatnots became very handy. You don’t need to spend a lot to come up with your very own party. You just need your imagination to execute your idea.

And what’s a kiddie party without games? I actually haven’t thought of games when we were planning for this but I knew that kids will have more fun if we do some competition. Since this was an impromptu plan, most of the games we did require minimal effort to execute.

First, I kept several candies and chocolates all over our living room and told the kids to find all the treats. It’s an easy game with lots of fun.

Everyone became little detectives looking for their sweet treats. 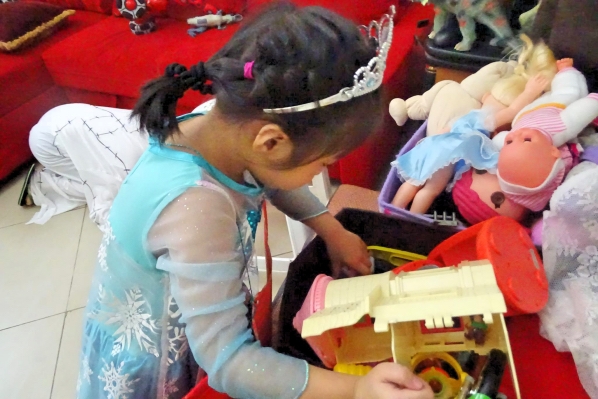 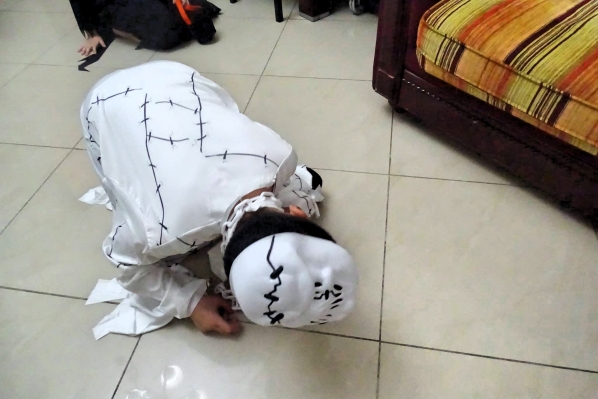 Next was the balloon popping game. Jholen drew some halloween inspired designs onto regular balloons and the kids just need to pop it using a pin. Since we don’t have a dart, I improvised by using a pin and pencil wrapped together using scotch tape. 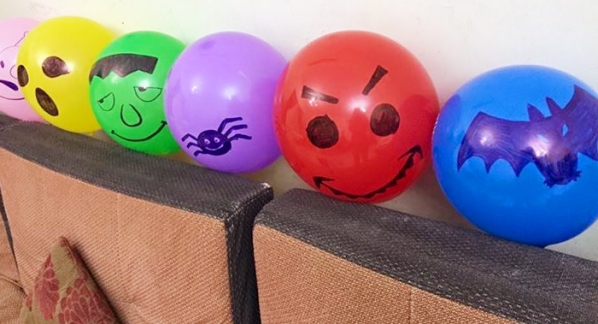 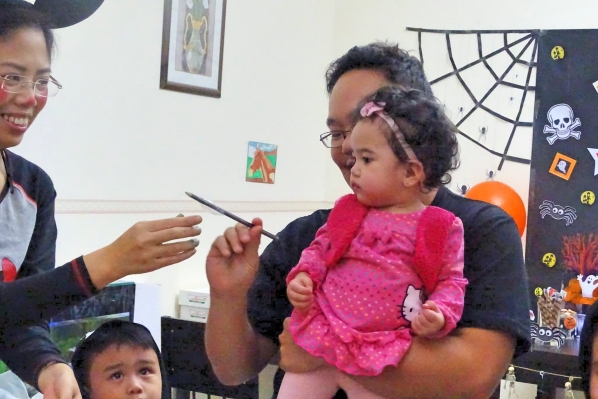 Last game is called ‘Bobbing with apples’. I thought this was an easy game but kids had a hard time catching the apples using their mouth.

I only had two apples and lemons in the fridge so that would do. Filled the bowl with water and dropped some food colour for ‘drama’. It would have been nice if it was red but well, I only have the blue color available. 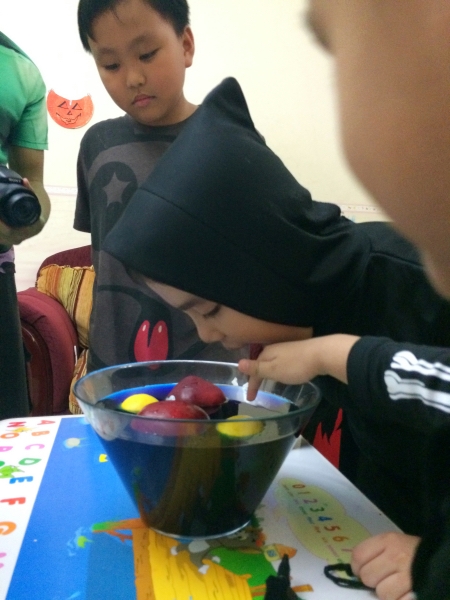 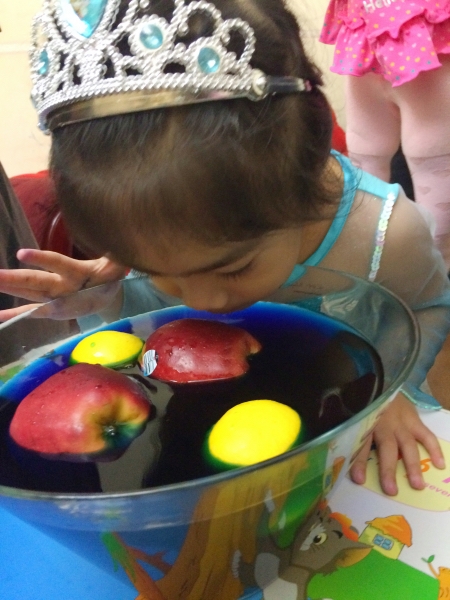 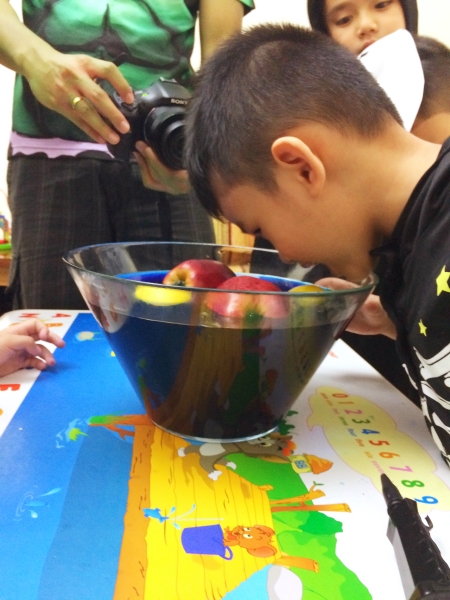 And the most enjoyable part was when we started to giving out and throwing sweets to the kids. They were scrambling and grabbing everything their little hands can manage. So much fun! Even adults enjoyed it. 🙂 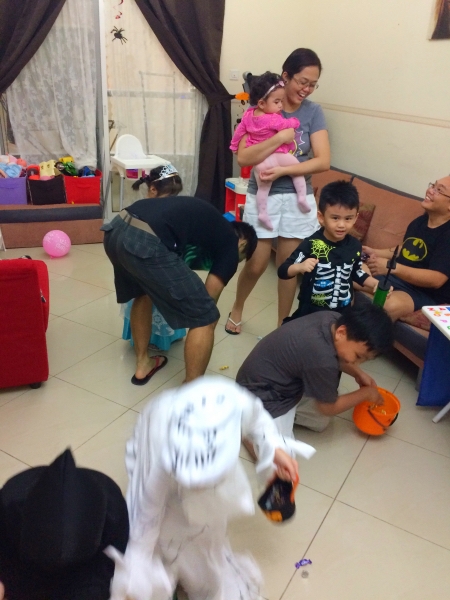 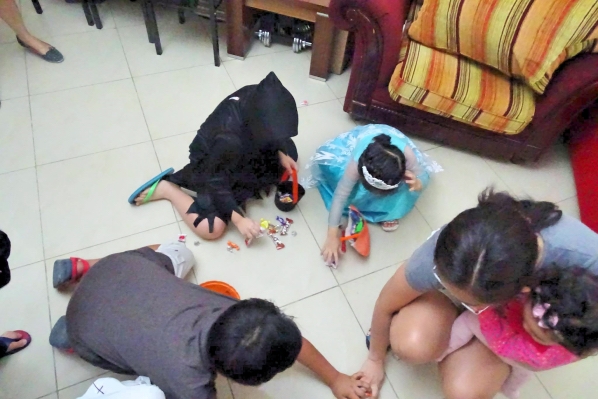 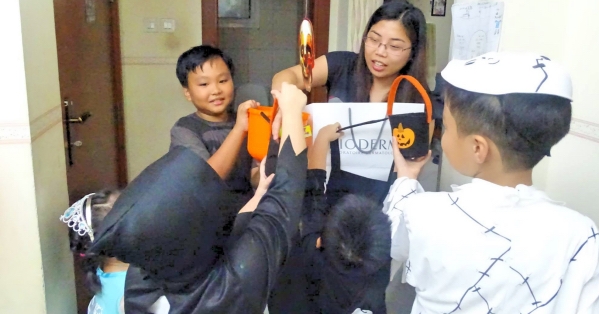 We prepared light snacks to nibble after the games and treats,

I think I’ll do this again next year. And next time, I will invite more kids in the building. It was more fun and my kids really enjoyed it. My son, who is brutally honest, said that he enjoyed it more than the previous trick or treat parties he had but he wants to have more games next time. Noted my dear.

Thanks to my sister for doing all these nitty-gritty art works. 😘 She’s really very good and watch out for our party decorating business very soon 😃 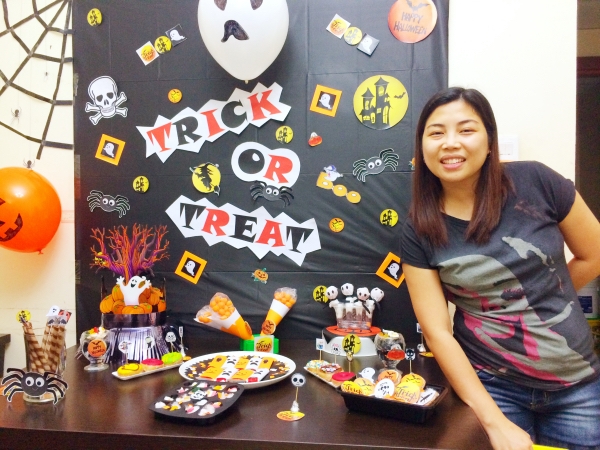 Happy Halloween and All Saints Day everyone 🙂