This is the second day of our DIY tour in Rome. For first part, click here.

I now understand the importance of eating brain food. I’m racking my memory to remember the sequence on how we did things. It’s just a few months ago but it feels like it happened years back.

Anyways, in my last post, I told you how we missed collecting our Papal mass tickets for Maundy Thursday’s mass. We decided that we’ll still go and hope for Divine intervention.

Our plan for the day was to attend mass and do the Vatican museums and Sistine Chapel tour. This itinerary might be too relaxed for some but having two kids in tow, we’re very conscious of not tiring them too much and we wanted them, especially Cole, to enjoy the experience.

Based on my research, we need to be in St. Peter’s square at least 2 hours before the mass. So we woke up early on our 2nd day and I prepared a breakfast of bread, egg, franks and some cold cuts. Breakfast done.

The area where we stayed, the Pantheon, is a central and busy location. When we arrived on our first day, the plaza was buzzing with tourists. This was how it looked almost every time. 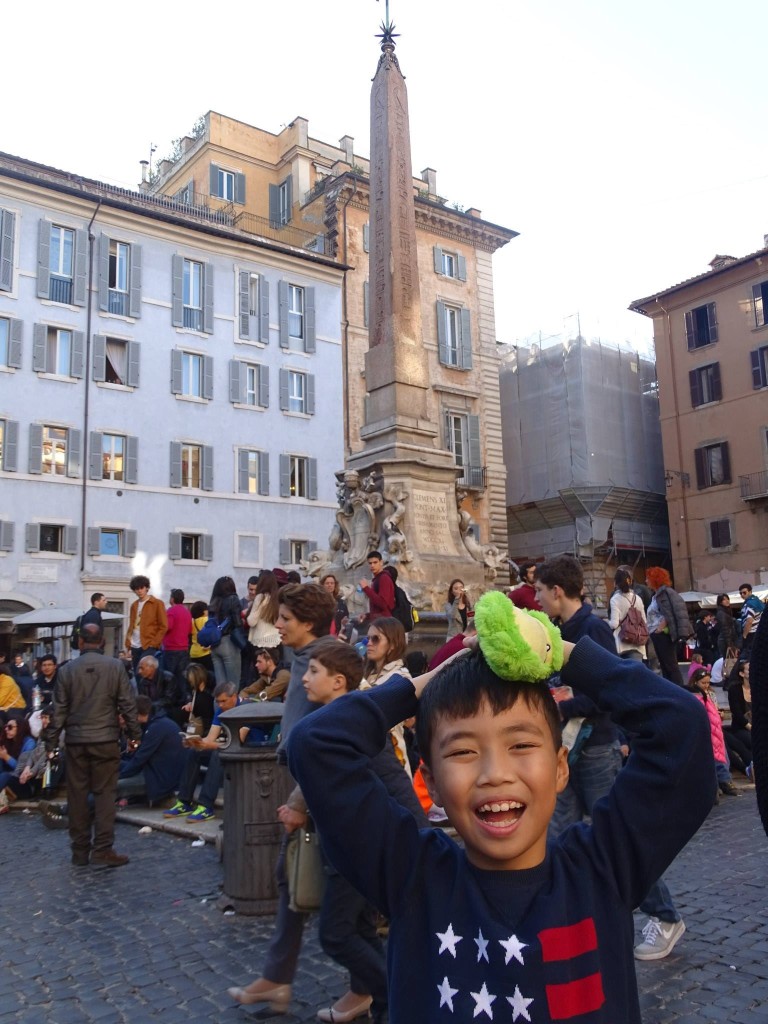 But since we started pretty early on our second day, we were happily surprised that the plaza was almost empty. Wow! This was taken by a couple who also started their day early. 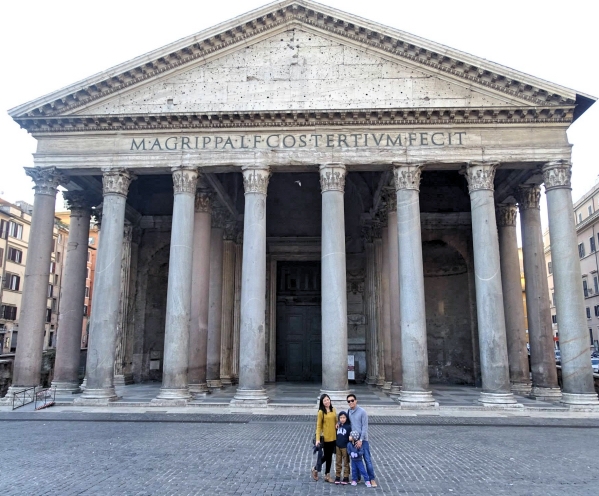 And this is Piazza Navona without the thousands of tourists. It’s almost empty! 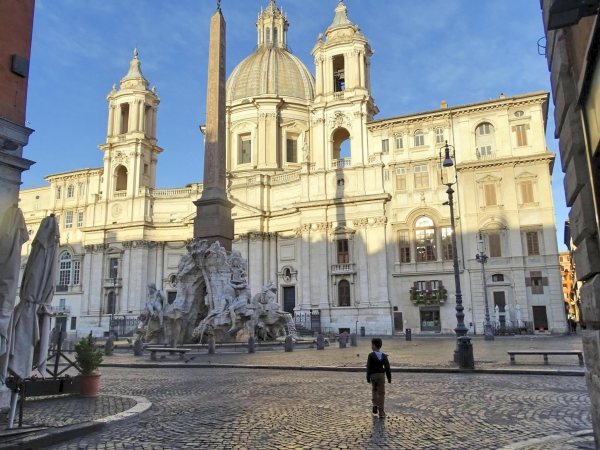 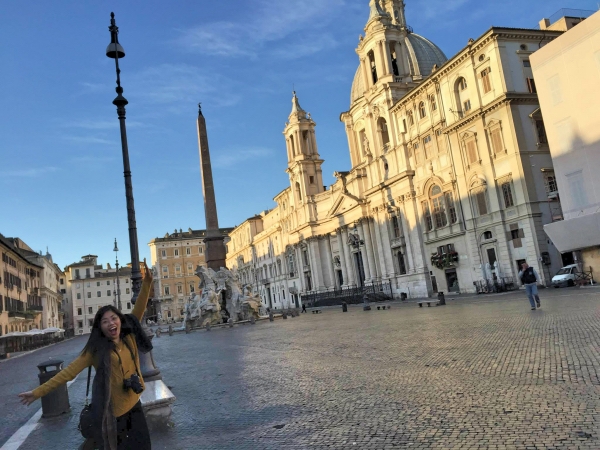 After few minutes, we reached the Vatican and then saw the queue. In less than 30 minutes, we were almost at the beginning of the line. The security were strict on checking the tickets and they were asking those who didn’t have to step out of the line. My heart was beating fast and I silently prayed that they’ll allow us to enter. When it was our turn to be checked, I told them very sweetly (with slight begging) that we didn’t get the chance to collect our Papal mass ticket and showed them our faxed confirmation. In broken English, they told us to proceed but check first with their office. I let a sigh of relief, at least we were not asked to leave.

You have to go through a scanner just like in the airport before you can enter St. Peter’s Basilica. I’m not sure if it’s because the Pope was officiating the mass or they do it as norm.

So, after going through the scanners, I left Gibson and the kids and went to their office.  A Papal Swiss guard stopped me at the entrance and I explained again our ticket dillema. He took my faxed copy and left. I was again hyperventilating and praying to all saints to let us attend the mass. After a few minutes, the guard in costume came back and gave us the golden tickets. OH MY G! Thanks God! 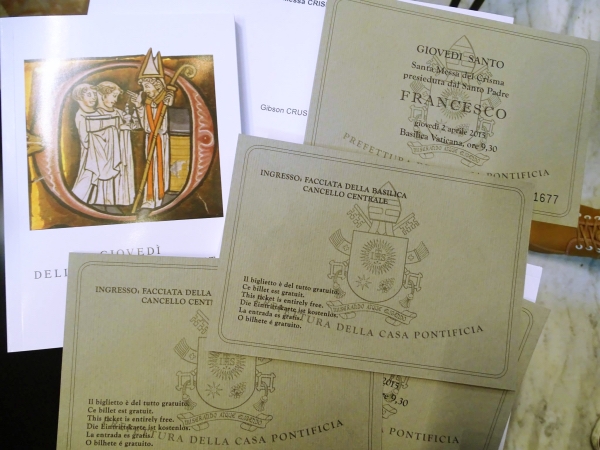 Here is a photo of the Papal Swiss guards just for you to visualize. I didn’t dare took a photo of the guard I spoke to ‘coz I don’t think he’s in the mood. 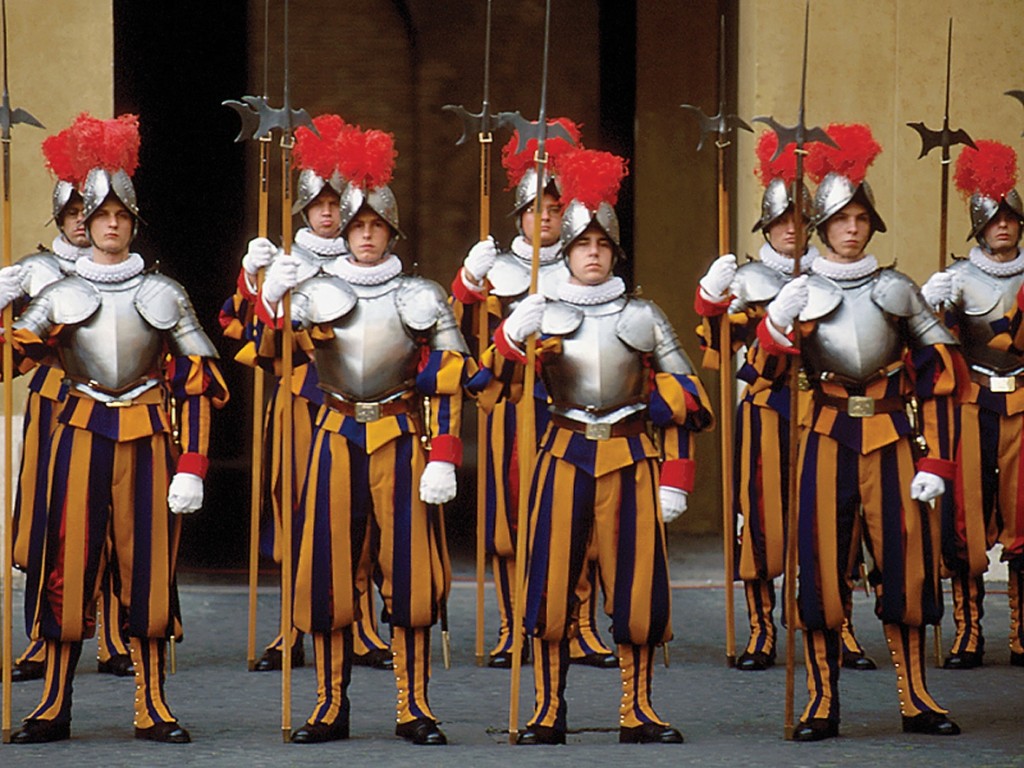 I really felt blessed because not everyone were allowed to go inside St. Peter’s Basilica. I noticed that there were some people after us who had tickets but was refused entry. I think guards were limiting the number of people inside the church for security reasons.

While waiting for the mass to start, some tourists were taking photos and since we don’t know if we will still have the chance to be inside this famous church again, we discreetly joined the crowd and snap some pictures. Gibson and I were amazed on how grand and beautiful this church is. It’s so beautiful, so divine. 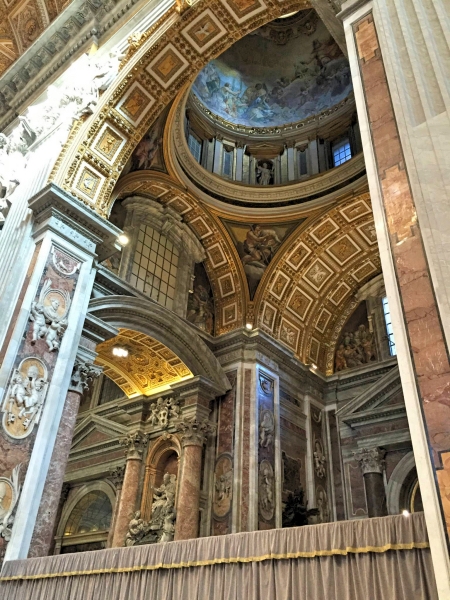 The architecture is very grand. The ceiling, walls, arcs… WOW! 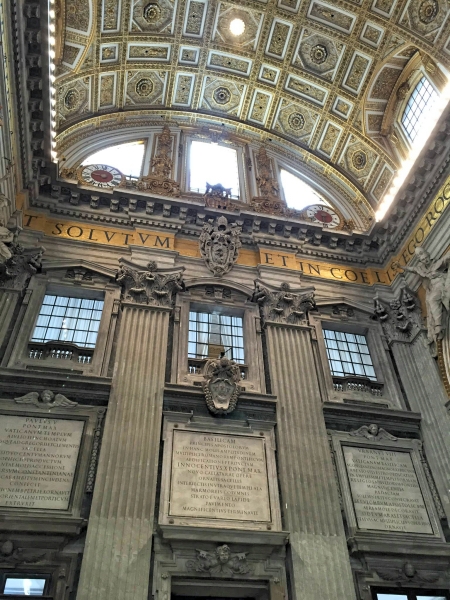 And the highlight of this tour was seeing the beloved Pope Francis. 🙂 We feel so blessed.

After the mass, we took more photos as a remembrance. This is the spot where Pope Francis faces the Papal audience whenever the mass is held in St. Peter’s Square.

The facade of the basilica 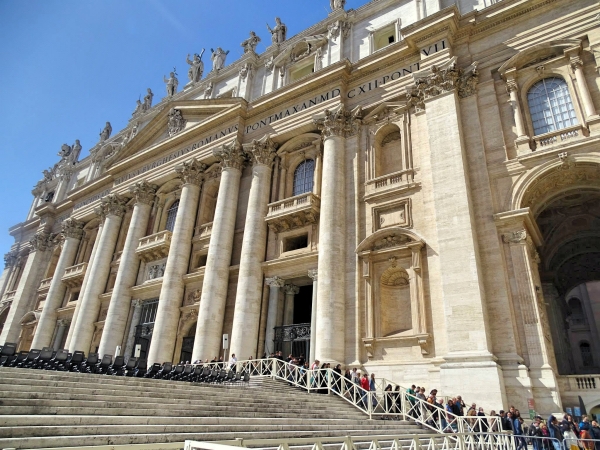 We grabbed a quick lunch of pasta and pizza (as you can expect) before proceeding with our Vatican Sistine chapel tour. If you intend to have this tour, I will strongly recommend (no, I am telling you) to purchase your ticket online. I just did few days before our flight (crammer, remember?) and this was the best decision ever! If not, you can expect a very long queue and may end up waiting for at least 2-3 hours to get in. Not my idea of fun. 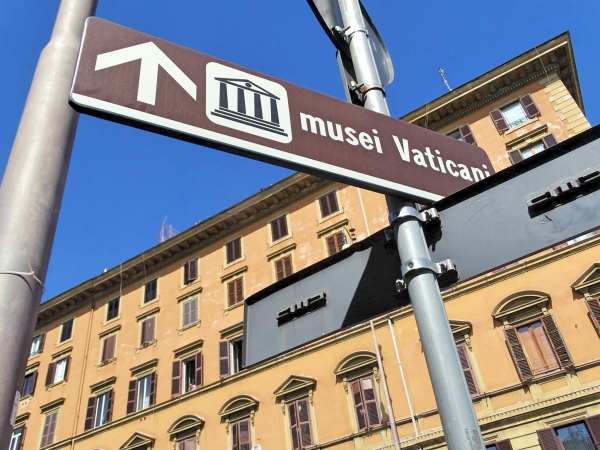 There are several tours provided by the Vatican and we chose the very basic one (the Vatican and Sistine Chapel tour). I just ordered an extra audio guide for Cole and that’s it. We paid EUR 45 in total. More details here. 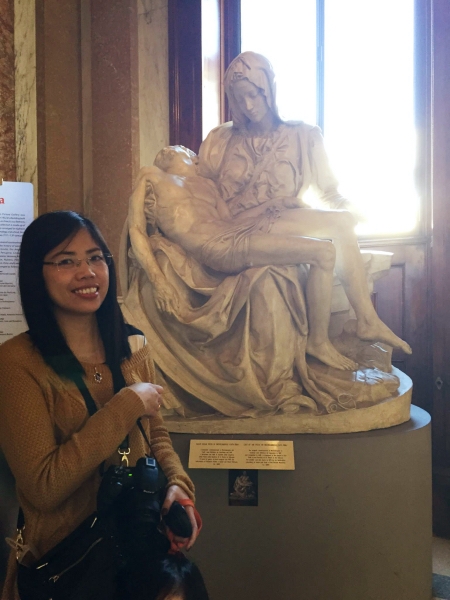 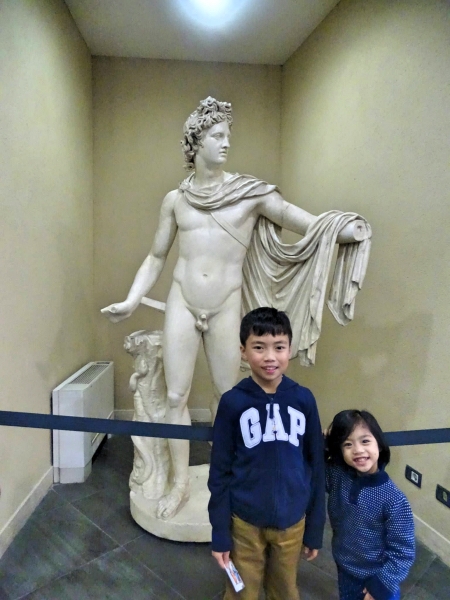 There are hundreds of paintings as old as the Romans. You can’t even imagine. And most of them are huge. Like wall to wall huge! 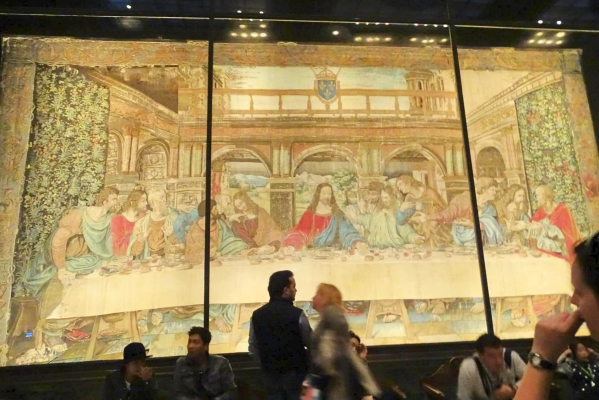 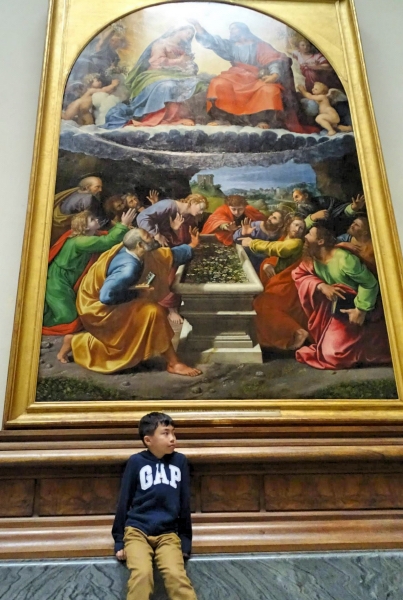 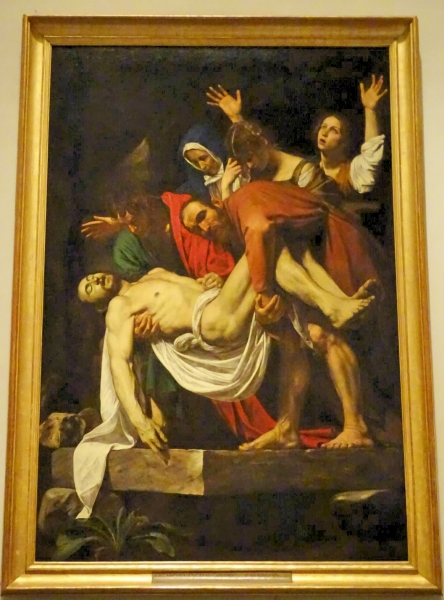 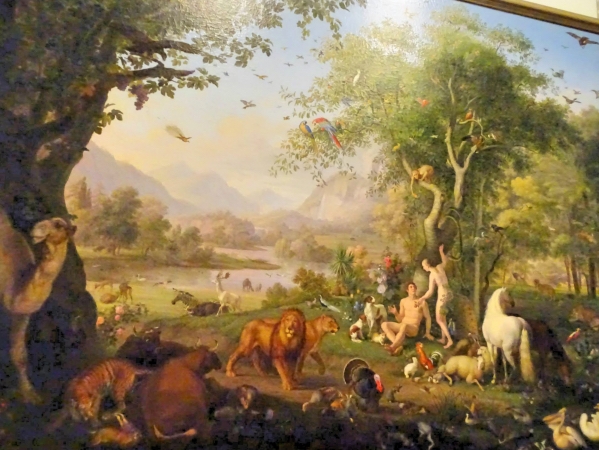 All these are hand-painted. Another WOW! 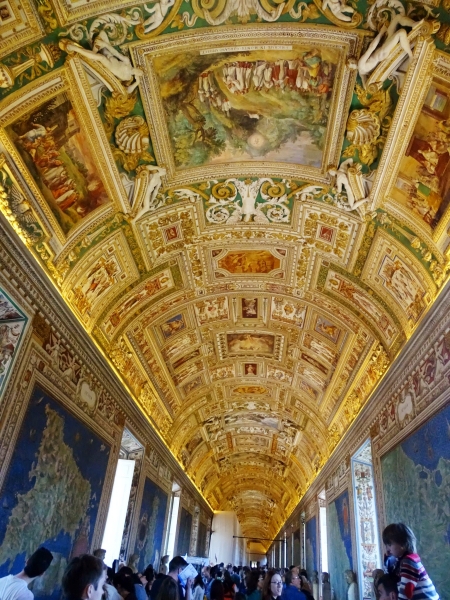 There are outdoors area where you can get some fresh air and grab snacks. 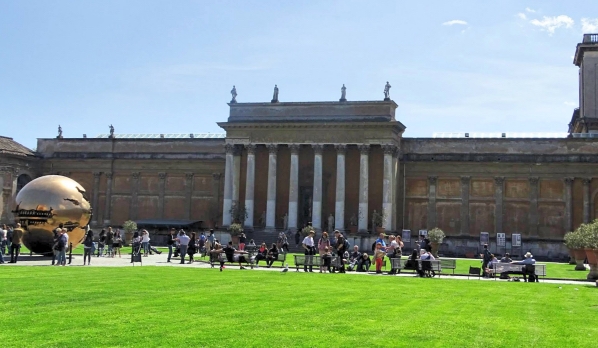 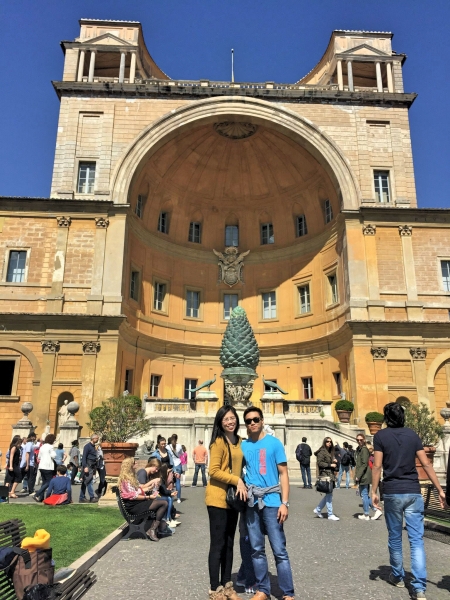 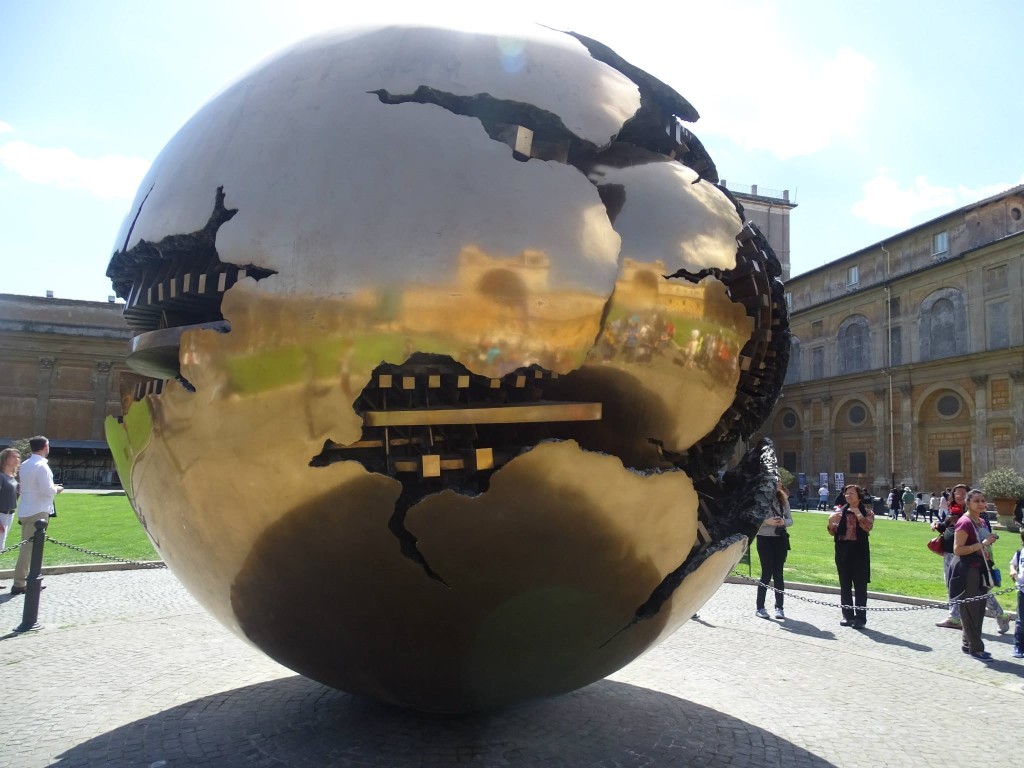 The last part of our tour was a visit to Sistine Chapel. 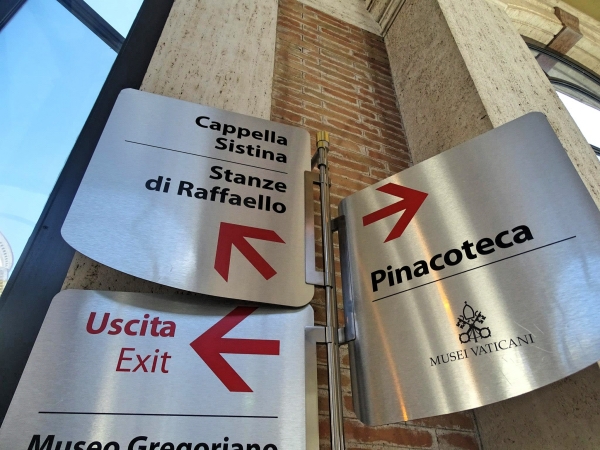 We don’t have any photo inside the chapel as it’s not allowed to take any. I can just say it’s marvelous. Truly a memorable experience.

I know that our ticket comes with St. Peter’s Basilica access but since we’ve been there in the morning, we just headed back to our apartment around 4pm. I’m too exhausted to cook so we just headed out for dinner. That’s it for Day 2.